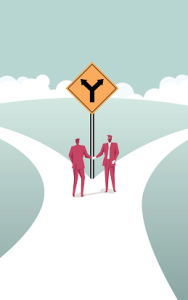 36 After some days Paul said to Barnabas, ‘Come, let us return and visit the believers in every city where we proclaimed the word of the Lord and see how they are doing.’ 37Barnabas wanted to take with them John called Mark. 38But Paul decided not to take with them one who had deserted them in Pamphylia and had not accompanied them in the work.39The disagreement became so sharp that they parted company; Barnabas took Mark with him and sailed away to Cyprus. 40But Paul chose Silas and set out, the believers commending him to the grace of the Lord.41He went through Syria and Cilicia, strengthening the churches. (Acts 15:36-41, NRSV)

Don’t think that disagreements in the church are anything new.

Jesus faced them, and it happened long before that.

Paul and Barnabas disagreed about who should be included in their journey, but they settled it by going separate ways. Not different ways. They went to share the good news of Jesus.

Can we disagree and move forward still sharing God’s love?