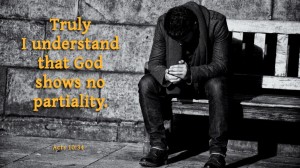 This is a wonderful passage of scripture. I added a few verses because the Narrative Lectionary people said to use Acts 10::1-17, 34-48, but there is more to the story in 18-33 that needs to be read.

Cornelius is a Gentile who is devoted to God. He prays regularly and gives money and time to help others, he is a true believer who seeks after God, and God sees this and tells Cornelius to send for Peter.

In between this Peter has a vision to help him understand what is about to happen. This sheet lowers from heaven with all kinds of animals on it, and these are animals we can assume that are not permitted to be eaten according to the Levitical Law. We do not know what animals are there as we are not told, but Peter says he has never eaten anything forbidden. So we can say for almost certain that these animals are not clean. And this happens 3 times, the perfect number of times and God tells Peter that everything God has made is clean and you should not call profane. Peter then hears the visitors have arrived and he goes with them back to Caesarea. There Peter makes this profound statement, “You yourselves know that it is unlawful for a Jew to associate with or to visit a Gentile, but God has shown me that I should not call anyone profane or unclean.” Everyone is welcome and clean in the eyes of God! We should not judge another person based on what we perceive is true, but we should accept them as they are because that is what God does. God created them and accepts them as they are. And this is taken even further when Peter realizes that these Gentiles have received the Holy Spirit, now what is to keep them from being baptized with water, even though they are uncircumcised?

God shows no partiality but loves all of his creation. Do we?