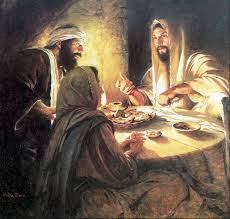 36While they were talking about this, Jesus himself stood among them and said to them, “Peace be with you.” 37They were startled and terrified, and thought that they were seeing a ghost. 38He said to them, “Why are you frightened, and why do doubts arise in your hearts? 39Look at my hands and my feet; see that it is I myself. Touch me and see; for a ghost does not have flesh and bones as you see that I have.” 40And when he had said this, he showed them his hands and his feet. 41While in their joy they were disbelieving and still wondering, he said to them, “Have you anything here to eat?” 42They gave him a piece of broiled fish, 43and he took it and ate in their presence. 44Then he said to them, “These are my words that I spoke to you while I was still with you—that everything written about me in the law of Moses, the prophets, and the psalms must be fulfilled.” 45Then he opened their minds to understand the scriptures,46and he said to them, “Thus it is written, that the Messiah is to suffer and to rise from the dead on the third day, 47and that repentance and forgiveness of sins is to be proclaimed in his name to all nations, beginning from Jerusalem. 48You are witnesses of these things. 49And see, I am sending upon you what my Father promised; so stay here in the city until you have been clothed with power from on high.” (Luke 24:36-49, NRSV)

Jesus appears to the disciples and eats fish so they know that he is not a ghost.

I mean what would you do. Simon Peter saw him and the 2 on the road saw him. But you didn’t see him and you know he was hung on a cross. How can he be standing in front of you now. It has to be a ghost. There is no way he is alive after being crucified.

Then he shows you his hands and the place where they put in the spear.

How has life changed forever?